Today marks the end of an era – the end of the eyelash extension era.  After eight weeks without refills in an attempt to get rid of them, I bought a pair of eyebrow scissors while out running work errands.  (Backtracking a bit, but 1. Who knew eyebrow scissors were a thing?  2. What separates them from regular scissors?  A slanted tip.  Thought that might minimize the possibilities of me poking my eyeball out, so I splurged and bought the $9 set instead of the $4 cheapy scissors.) 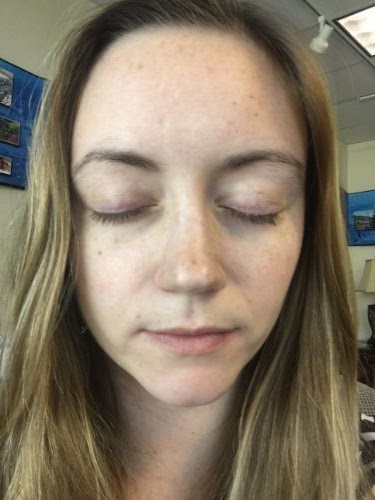 I got eyelash extensions because my confidence was struggling.  I thought doing something fun that improved my appearance would make me feel sexy and confident, and it did.  My friends ooh’ed and ahh’ed over them, and I grew super confident and comfortable in my non-makeup wearing ways.

And then, one fateful day, my eyelash extensions started to fall out in chunks, and I had a noticeable gap.  And the lady who does my eyelashes couldn’t take care of me because she was onsite for a wedding that weekend, so I was stuck with the gap.  I realized that something that I had originally wanted to bring me confidence was becoming very high maintenance, which was never the goal.  (Pre-blogging I had unlimited spray tanning, which was a similar situation.  Eventually I said screw it, and embraced my extremely pale skin.  Are we sensing a trend?)

So armed with the confidence boost I received from constantly looking doe eyed, I decided I was going to give up the eyelash extensions.  I cancelled my refill appointment, and I assumed that they would be completely gone in less than two weeks at the rate they were dropping.  But instead, they held on for another six weeks, and would probably still be hanging on for another six months from there if I hadn’t reached my wits’ end today.

After trying the methods of sleeping without a mask, brushing them obsessively, taking super long showers with my face directly in front of the water, and even soaking them in olive oil, basically breaking the four cardinal sins of eyelash extension maintenance, I bought that pair of eyebrow scissors, and (carefully) hacked the remaining lashes off in the bathroom at work.

My eyelashes are currently miniature, but thanks to the NeuLash that I started applying almost immediately after deciding I no longer wanted to have high maintenance lashes, they are growing back thicker than before.  And in the meantime miniature things are totally cute, right?

Happy Friday, friends, and thanks for following along on my ridiculous adventures!

ps – This is not an endorsement for hacking off your own eyelash extensions with a pair of eyebrow scissors.

pps – This is not a sponsored post.  I’m just really thankful NeuLash exists.