In August, my “Wednesday Wisdom” posts are going to be less about advice and more about lessons that I’ve learned in life or things that I have struggled with.  Bloggers get a really bad rap for only posting about the positives in their lives, so I’m pushing myself to open up and talk about “the hard stuff” with y’all.  I was going to title this post “My Anxiety Makes Me Feel Like an A**hole,” but I didn’t think that profanity in a blog post title was very becoming. 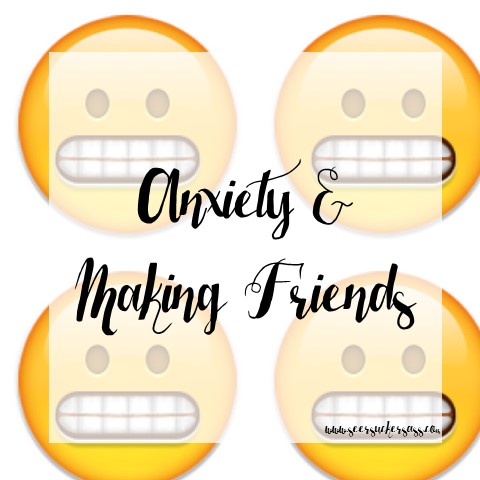 Let me give you some backstory on my life.  Growing up, books were pretty much my only friends. My grandmother was a librarian, and she taught me to read a full year before Kindergarten.  In elementary school, I would usually go to a different grade level for reading classes or my teachers would let me work through the big “classroom readers” during group reading.  I went to a K-8 school, so once I got that “weird, smart girl” label, I was stuck with it.  When most of the girls I knew were really into boys and starting to go on dates, I was really into dance and fashion, and I really wanted to go to a performing arts high school.  In seventh grade, I actually made a friend!  She transferred in from a neighboring county, was super popular, and really took me under her wing.  But she never came back after Christmas break, and I was devastated.  (And also made fun of for not knowing that my “best friend” had transferred schools.)  Dance was also a struggle, because I traveled almost an hour to take lessons, and all of the other girls went to school together.

High school was better for me.  Instead of going to the school that my K-8 fed into, I went to a school on the opposite end of the county.  I joined the dance team, and I not only excelled, but I made friends.  And then I got to college and joined a sorority.  Boom!  Instant friends!

One thing I realized about post-grad life was that a lot of the friends I made had been “situational.”  I wasn’t really good at making friends, but high school and college had afforded me opportunities to make friends.  It was easy to ask a girl on dance team if she wanted to go get Mexican food after practice or ask a sorority sister if she wanted to go to the library with me after Chapter.  It wasn’t so easy to meet people after graduation, and it was even harder to stay in touch with them after the networking event/ young professionals event/ co-workers birthday party that I met them through.  I also realized that through my job, I knew a lot of people, but I didn’t know a lot of people.

I had one of my moments where I felt like “middle school me” at the beginning of the year.  I was appointed to a board, and I was psyched.  But when I got to the meeting, I realized that I knew a lot of people, but again, I didn’t know them.  So I sat by myself, awkwardly played with my phone, and felt like everyone was judging me for being a loser.  Until the then President of Junior League yelled across the room for me to come sit with her.  Joining Junior League has been a goal of mine since I was about 20 years old, and when she talked to me about becoming a Provisional, I was on Cloud Nine.  Like, I’m pretty sure I started glowing and sunshine was shooting out of my pores.

And then here comes the moment where my anxiety makes me feel like an asshole.  About a month ago, I went to an Open House for Junior League.  I realized I knew more people than I thought I knew, and I felt pretty comfortable.  And the President complimented me on my new job and how I was recruited in front of the table, and I was so giddy that felt like I had just gotten to be the Line Leader in Elementary School.  But then there were women at my table who knew no one, or who were there with friends that were trying to introduce them to people… and I acknowledged none of them.  Me, the girl who spent the first 13 years of her life with so few friends that I could count them on one hand, the girl that ate lunch with a book or with one of the special education aides.  And I felt like the biggest bitch in the world, because I knew what it was like to be at something alone, and I could have been inviting, but I wasn’t.

Why didn’t I say something?  Anxiety.  I couldn’t figure out what to say in the moment.  Instead of being like “Hi, my name is blah blah.  Are you a provisional, too?”  or “I heard you say you were in the orchestra, what instrument do you play?”  I sat with my back turned to everyone and talked to my friends.

So, I’m setting a new goal for myself, which is to -gasp- sit by someone I don’t know at tomorrow’s Provisional meeting.  I know that my anxiety can make me look standoffish, and my resting mean face does not help.  My biggest reason for joining Junior League is to grow as a person, and I’m going to use it as an opportunity to push myself out of my shell. I really want to be the type of person that makes everyone feel comfortable and at ease, and not so much the girl who sits and reads a blog post on her phone because she doesn’t want to make eye contact with new people.  (#callingmyselfout)

If you have anxiety about making friends like I do, I want to share a list of three tips that I hope will help you in social situations.  Knowing that I would be attending that meeting tomorrow, I brainstormed a few things that I thought would be helpful.

And if you don’t have anxiety about making friends, I would love for you to leave a comment with a little piece of advice for those of us that do!  Y’all are so wise, and I can’t wait to hear what you have to say!

Do you have social anxiety or are you more of a social butterfly?