Sorority recruitment is right around the corner, and the blog posts and tweets with sorority recruitment advice are out in an abundance!  There is some great information about there, but there are also some misconceptions and posts that further perpetuate stereotypes.  As a sorority alumna and a former recruitment counselor, I have created a list of things that I really want girls to know going into sorority recruitment.  I hope these tips will help you feel confident, prepared, and informed! 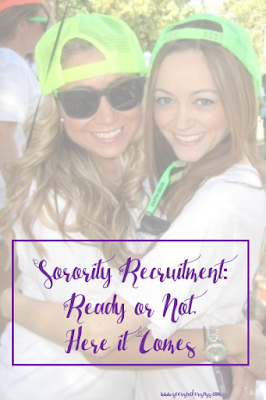 Here are some things that I want you to know:

1. You do not have to own specific brands to get a bid.  Nothing burns me up like seeing a blog post that makes girls think they have to wear Lilly, Tory, and Yurman to get a bid.  When I went through recruitment, I wore pieces from my closet.  I received the same number of compliments on the ruffled Forever 21 dress that I wore for Preference Night as the ruffled Marc Jacobs top I wore on Philanthropy Night.  (I was going through a ruffles phase, apparently.)  If you don’t wear heels, don’t pull them out for recruitment.  If you’re a bohemian goddess, don’t feel like you need to straighten your hair and throw on a button up and khakis.  Do you and be yourself, not who you think a sorority wants you to be.

2. Total Sorority Move is not real life.  It’s satire.  And if you’re Greek (or a lot of times just a female in general), you’re in on the big inside joke.  If you spend time to trying to model yourself after the website, you’re not going to end up where you’re meant to be.

3. There are dues and rules.  I will never forget the presentation our Standards chair gave us at my new member retreat.  There were what seemed like soooo many rules, and I didn’t understand it.  I had just joined a sorority, which was supposed to be really cool, and now I’m being told what I can/cannot post on social media, that I have to come to philanthropy events, and that I have to take a test?!  Sometimes the rules seemed silly, but when I graduated and was working on establishing my own personal brand, I was so thankful that my social profiles were free of profane language and questionable photos.  (Any post-grad boss I’ve ever had follows me on every form of social media, some of them even before they were my boss.)

I also think it’s important to touch on the fact that there are dues, and they don’t go away.  I know a lot of girls who went in without knowing how they would pay their dues, but just planned on figuring something out.  To be honest, most of them had to quit because they couldn’t maintain the financial responsibility.  Sororities are expensive, and it’s important to know how you’re going to pay your dues, especially after that first semester when your abundance of graduation money runs out.  (It’s also important to realize that you will have sorority expenses aside from dues.)

Something that you may not know is that some schools don’t allow sorority members to talk to girls once they sign up for recruitment.  I was never a fan of the rule because I felt like it made me look like a snob, but I followed it anyway because the purpose of the rule is to protect potential new members from “dirty rushing.”  (No one wants a rush infraction.)  If you’re hoping to get to know sorority women before recruitment officially begins, the best way to do this is by going to events presented by the Panhellenic Council. (Confession:  I went to all of them because I wanted as much face time as possible before recruitment actually started!)

4. Sororities have standards.  And sororities want to be sure that you are willing to rise to meet their standards!  Some sororities will have higher GPA caps than the one that is set for recruitment.  It’s also important to keep your social media profiles appropriate.  If you’re 18 and holding a beer in your profile picture, it might be a good idea to change it.  And if you go out during the gap between school starting and recruitment, remember that girls in sororities will be out, as well!

5. A bid doesn’t define who you are.  If you don’t get a bid to the house of your choice, or if you don’t receive a bid at all, it’s not the end of the world.  (I promise.)  I know girls who didn’t get a bid their first year, rushed again their sophomore year after having an opportunity to improve their grades or get to know girls in the chapters, and received a bid from their first choice chapter!  I know other girls who didn’t receive bids and decided to take their talents to other on campus organizations where they absolutely thrived.  I cannot stress enough that a bid to a Greek organization does not define your worth.

If you’re interested in reading more about my sorority experiences,  check out these posts:

Sorority Recruitment:  What to Expect

Sorority Recruitment:  What to Seek in Sisters  (my most popular blog post ever!)

Disclaimer:  I am writing this as a sorority alumna who wants to help girls feel confident and informed going into sorority recruitment.  This is not an endorsement of any sororities, nor is this written on behalf of a sorority or the National Panhellenic Council.