I’m sure we’ve all seen the little graphic on Pinterest, Facebook, or somewhere or another that states, “Comparison is the thief of joy.”  If you stop and think about it, it’s so true. 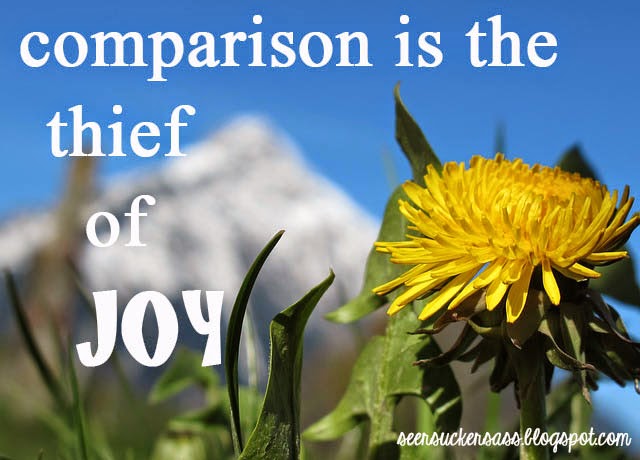 Often times, I compare my life to the lives of other people, and I find myself getting frustrated.  Last week, I became so annoyed with a girl for posting a frantic Facebook status about how nervous she was that her dad was having to fly 1,000 miles away for the week.  My frustration stemmed from the fact that my dad’s job requires him to travel internationally, and he’s on the road more than he’s home.  I thought it was silly to be worked up over something so miniscule.  But just because something isn’t a concern to me doesn’t mean someone else isn’t allowed to be concerned over it.  I can’t compare my life and my problems to someone else’s.  It’s seriously like comparing the dandelion and the mountain in the photo above.  It makes no sense.

I recently started seeing a counselor over my severe test anxiety.  We realized that the issue wasn’t exactly the LSAT, but the fact that I was putting so much pressure on myself to do well so that I could start law school next fall.  I wanted to take the LSAT one last time, and if I had to retake it again after that, it would put me starting another year later.  I see my friends moving on with their lives – surviving their first year of grad school, getting married, getting a house, having babies – and instead of trusting God’s plan and timing, I find myself rushing to complete these things as well, so that we’re all in the same place.  But what’s great for my amazing friend that will be a 2L and a new bride in the fall, or for my sweet little who gets married next month and graduates from undergrad in a year from December, may not be what’s great for me.

In the blogging community, I think it’s so easy to compare yourself to other bloggers.  There are girls out there who seem to have it all – the best hair, the cutest monogrammed bikini with the perfect body to wear it on, the newest Prada bag – and I catch myself comparing my life and their lives.  But at the end of the day, I have to accept that we have been given different opportunities in life, and happily take what I have been given.

I challenge you to think about what makes you truly happy and to trust in God’s plan for you, instead of focusing on all of the joys or issues of those who surround you.  I definitely plan on working on it, and I hope y’all will join me on that.