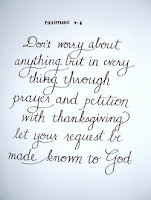 This week has been a stressful one for me, as I am about to
commit to a law school.I spent all day
Monday wondering if it was worth it to go into so much debt, not to even be
guaranteed a job upon graduation.With
everything happening in Boston, I felt like maybe it was better for me to be
close to home, and not five hours away in a town where I know only one other
person, an acquaintance that is good friends with my Big.Tuesday I read one of those heartwarming stories
on Facebook about a man who chose to be homeless so that he could travel where
the Lord needed him, and he depended on the help of the Lord.I don’t know whether it was a true story or
not, but it touched me in a way that I can’t describe.So I prayed that God would use me where He
wants me.If that is law school, then
fantastic!But if not, that’s okay, too.

Tuesday evening, I received a text from a friend that has
helped me a lot throughout the entire law school process.She no longer wanted to go to what had been
her top choice school, and she had just committed to the school that I had
intentions of going to.She told me to
keep her in mind if I needed a roommate.I felt immediately as though God had answered my prayer.I would now have a friend where I was
moving!I would be able to live with a
nice, normal person that has the same grandma tendencies that I do (and wears
the same size that I do!Lets be real,
that is something to be excited about.)

I was checking my email Wednesday morning when I found an
e-mail from the school that I am about to commit to.They were offering me a technology stipend,
and since I already had said technology, I could get a gift card.Again, I felt like a prayer had been
answered.The generous amount on the
gift card would help me to furnish my new apartment.I was ecstatic!And as word spread around the office, people
asked me what I needed for my new apartment.They were excited for me and wanted to help me on my journey to law
school, even though my internship just started in January.Having people besides my mom and best friends
support me isn’t something that I’m used to, and I was taken aback by their
kindness and selflessness.

Yesterday, I received a set of containers and coffee cups to
go in my new kitchen.I ask you to
please pray for the lady that gave them to me.Her kindness has answered my prayers, and I hope that in turn, God will
answer her prayer to help her father beat cancer again.

Have you seen the power of prayer in action?I’d love to hear about it!

Hope everyone has a fun and safe weekend… TGIF!